Chapter 2 What is Social Media?

Back in the “old days” of the 1990’s, websites were simply pages with a logo, some words, and some blue links. When I do trainings, one of my slides is an Amazon site from this time. An Amazon logo on the top of a gray page with blue links to the books. Basically, organizations tried convert their brochures into a web page. This is often referred to as brochure-ware. 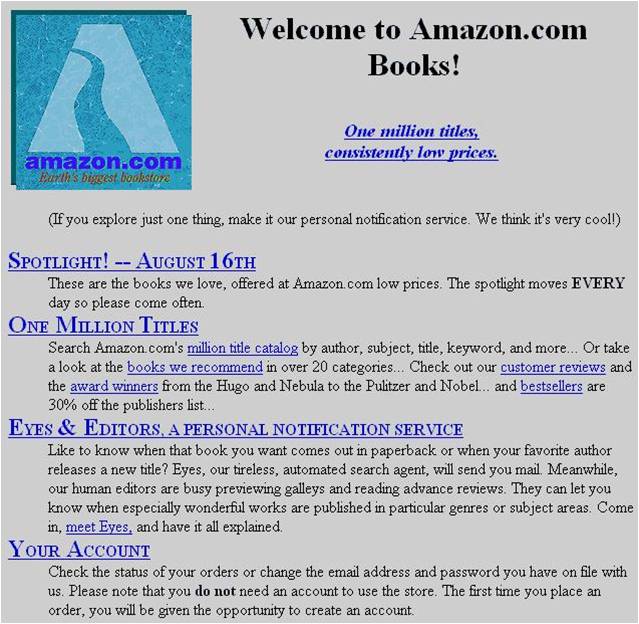 An early version of the Amazon.com home page from the mid-1990s.

Moving From Brochureware To Interaction

Businesses have improved their web presence since then. They allow customers to interact more with the company and to even customize their experience. But many of our nonprofit websites haven’t left the 1990’s. They’re not much more than digital brochures or “brochureware.”

We may have great information on the page, but we control all the content. There’s little opportunity for fans to add their comments or join an email list or sign a petition. Worse still, we often make it hard for people to see how to make a donation. This would be fine if we just want people to come to our site and read a brochure. But that is a sure recipe for disaster in the 21st century.

Amazon discovered it could sell more books if it allowed customers rate books and write reviews. It turns out we trusted other customers’ comments more than we trusted Amazon’s.

It’s the same with nonprofits. Fundraisers are expected to say nice things about the nonprofit since they get paid by it. But “real people” saying nice things is much more convincing. Real people don’t have anything to gain, so their comments are seen as more authentic. 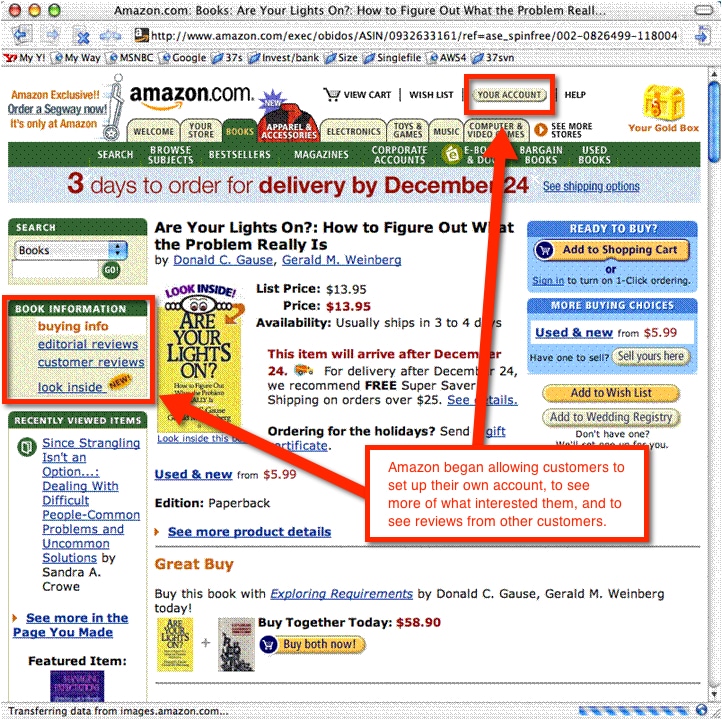 Amazon began allowing customers to personalize the Amazon website by setting up their own accounts and by leaving their own reviews of books.

The truth is, users have always been generating their own content. It’s just that today’s tools are more sophisticated than a pamphlet, a can of spray paint, or a picket line. And today’s tools can have a much wider impact.

Let’s be honest: this freaks us out. Why would we want to turn our websites over to other people? Isn’t that the same as turning our brand over? We live in the illusion that we control our nonprofit’s message. We like that illusion. Like a child snuggling a blanket, we find comfort in it.

But it’s not true.

We’ve never controlled the message. People have always been talking about us and our organization—saying both good things and bad.

One common objection to “social media” is that it’s “just a fad; it’s not going to last.” But seen in this light, social media is just another set of tools for our being social. It’s birthed out of our innate desire to communicate and connect with others. We’ve been doing this stuff for millennia. Ancients used to gather around the campfire, and cave walls are filled with drawings of killing the wooly mammoth. Today our campfire is the Internet, and the drawings can be viewed by anyone with a web browser.

User-generated content can be audible—recordings of lectures or music or just a personal ranting. These are often called podcasts. NPR podcasts each of its show segments, but you can make one right from your laptop. My kids make them from their iPods! Audible user-generated content, like a podcast, is often shared on sites like iTunes, Stitcher, Last.fm, MySpace, Google+, and Facebook.

User-generated content can be video—Apple found that out when iPod fans started creating their own iPod ads. These ads were good. Another example is the completely volunteer made movie “The Hunt for Gollum,” a story birthed out of fans’ passion for Tolkien’s Lord of the Rings trilogy.

The more passionately people identify with a product or cause, the more inclined they are to tell their friends. And some of that telling can be amazingly creative. Video content can be shared on sites like YouTube, Vimeo, and—yes—Facebook and Google+.

Ironically, in the social media age, in an age of user-generated content, creating our own content is king. The more our organization creates, the more our users will be able to share with their friends. David Wells, founder of www.SocializeYourCause.org says “Always be creating content. Content is the currency of social media.” So one key to effective social media outreach is to be creating content all the time. And sharing the content created by others.

This doesn’t mean we necessarily have to do much more than we’re currently doing. But it does require we think differently about what we’re already creating. Rather than a static homepage that never changes, we may want to have a home page that features the stories in our latest newsletter or view-book. When our CEO or board chair speaks, we may want to record her for an audio offering on the site. Or take a quick video of her to upload to YouTube (and enable comments). We are already doing the newsletters and our CEO is already speaking. But now we get much more use out of things that used to be one-time hits. This is called the long tail.

All too often, someone in our organization goes to a conference or reads an article about social media and drinks the social media Kool-Aid. They jump in with both feet, joining social networks and posting things all over the web. They drive people around them crazy trying to get them drink the Kool-Aid too. Some people ride this high for an amazing period of time. (At the time of this writing in 2013, I know people who are still advocating AOL and Yahoo! Groups, tools that were cutting edge 12 years ago but have been surpassed since then!)

When the excitement finally ebbs, they get frustrated. People in their organization aren’t “getting” it fast enough. Or donors and supporters aren’t jumping on the bandwagon the way the guy at the conference said they would. So they give up, and stop creating content. When people ask, they answer, “We tried that. It didn’t work.”

Unfortunately, years later, that content is still up there. Having old, dated information online reflects poorly on a nonprofit. I recently searched for information on a location I wanted to visit. The travel guide website that listed it had a warning that the location wasn’t opening until the fall of 2007. That was six years ago. How in the world can I trust anything else written in that travel guide?

What if a donor said that about your nonprofit website?

It’s far more effective to channel that enthusiasm into creating a sustainable strategy that fits the style of the organization. We’ll show you how to put it together in the next chapter.

To learn more about becoming a private coaching client,
go to our Executive Coaching section

Sign up here to be among the first to know
when it's open to a wider audience!