Be thankful for what you have; you’ll end up having more. If you concentrate on what you don’t have, you will never, ever have enough. – Oprah Winfrey

The deepest principle in human nature is the craving to be appreciated. – William James

Appreciation can make a day—even change a life. Your willingness to put it into words is all that is necessary. – Margaret Cousins

Silent gratitude isn’t much use to anyone. – Gladys Browyn Stern

Feeling gratitude and not expressing it is like wrapping a gift and not giving it. – Unknown

The meeting of two personalities is like the contact of two chemical substances: if there is any reaction, both are transformed. – Carl Jung (1875 – 1961)

Friendship is certainly the finest balm for the pangs of disappointed love. – Jane Austen

Congratulations! You’ve done your research; you’ve engaged your prospect, you’ve asked them for money, and you’ve answered their objections.

If they say, “Yes! We are thrilled to give you a gift at the level you asked for,” then you’re a happy camper. Send them a hand written thank you. (I prefer using blue pens. I’ve heard people respond better to blue. This may be because it looks more “real” than something run through a printer.) I’ve heard we should thank people at least seven times before we ask them to invest again. Follow that with a more formal thank you they can file with their tax information. And be sure to keep inviting them to “engagement” events.

I find it helpful to think of the Get R.E.A.L. process as a circle: 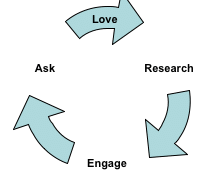 But what if after all your hard work they still say, “No”? Do you just blow them off? Flush them from your mind? Hop in your car and yell, “Next!”?

People are always more important than their gifts. Stop right now and repeat it to yourself until you believe it: “People are always more important than their gifts.” Besides, gracefully handling a rejection, may lead to a much larger gift later on. A “no” now is simply that…a no for now. They may make a gift in the future. If you’ve done the researching and engaging effectively, you had some concrete reasons to ask for the gift. Keep nurturing the relationship. This can be as simple as sending a note every few months. There may come a point where you stop interacting with the person, their interests may change, etc., but don’t just cut off contact because you feel rejected.

I knew of a donor who became so disappointed with an employee leaving she asked for her $40,000 gift back. That was about 10% of our annual fund! I’m proud to say that the decision makers did the noble thing. Rather than threatening legal action, they sent it back. That kind of decision takes integrity.

They also did an incredibly brilliant thing—they convened a team of three individuals to create a strategy to bridge the donor’s interest from the former employee to the entire organization. And it worked. Eighteen months after requesting her gift back, she made a pledge of half a million dollars. And she spoke very movingly at a donor event about the importance of the organization in her life.

What would have happened if the leaders had taken her to court to keep the $40,000? Or had told her there was no way in hell they would give her gift back? Even if they were able to keep the gift how much would it have cost them?

Like so much of fundraising, the “love” step is a good case of common sense. This rests on knowledge that’s been around for millennia. Thousands of years ago, the revered rabbi Hillel said, “That which is hateful to you, do not do to others.” And a few centuries later, another rabbi named Jesus said, “Love others as you love yourself.”

Fundraising is a relationship business. Just like in gardening, not all seeds grow at the same pace. Some need more time. Some plants grow every other year. Loving donors involves asking them when they’re ready. Sometimes, loving the other person means not asking for a gift.

I went to visit someone who had been very generous to the school in the past. A few decades before, he had given a cumulative amount equaling six figures. Since then he had sort of lost touch with us. When I got to the retirement community, I asked the receptionist to call him, not noticing the hesitation in her response. She called his wife and told me she’d be right down. As I waited, I turned toward the door. There facing me was a picture of the gentleman I was going to visit with the words “In Memory Of” and the dates of his birth and today’s date. It turned out he had passed away at 2 a.m.!

I didn’t make any ask that day. This was one of the those sacred moments we get as fundraisers. I stayed with his widow for three hours, hearing about their life together, the trips they had recently taken, seeing her pottery kiln, listening about her kids. I was able to minister in a way few others could have. Everyone else that called or stopped by knew them as a couple. They all felt compelled to say something but not sure quite what. Most resorted to asking about funeral details. I was able to just be with her.

The last—and possibly the most important—aspect of being real in your fund raising is that of loving the donors. They have to feel you care about them just as much as you care about the organization. More than likely, you got into fundraising because you believed in what the organization was doing and you enjoy interacting with people. Don’t become so focused on the gift that you forget the giver.

One way to love on your donors is to ask them how and when they’d like to be asked. Another is to find out how they’d like to be acknowledged. Many nonprofits have an annual dinner to showcase and honor their best donors. But I know of few that have asked their donors if they like to be honored publicly. Many generous people enjoy giving quietly, away from the spotlight. The most meaningful way to thank them could be by taking them out to dinner. Or involving them in a smaller reception at the executive director’s house.

Learn to create systems that make loving on your donors and prospects habitual. You’re objective is to raise money. You’re not around to be the entertainment director. Successful fundraising is a constant tension between effective strategic engagement and honoring, respectful people skills. You need to focus your efforts on a carefully selected group of people and you need to do that while treating all the others with respect.

I’m convinced that if we’ll learn to honor people more than their money, we’ll probably find our funding challenges getting smaller.

Now that you’ve learned the four “Get R.E.A.L.” steps, let’s take a look at some of the ways not to ask for money.

To learn more about becoming a private coaching client,
go to our Executive Coaching section

Sign up here to be among the first to know
when it's open to a wider audience!