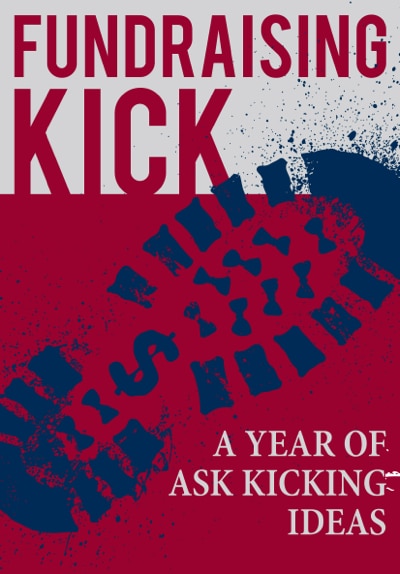 What they really need is a little kick, something to get them out the door and asking. Encouragement to act on what they already know.

What provides that kick?

Fundraising training and seminars can provide that kick. But before long, the enthusiasm wears off.

Fundraising coaching is excellent at providing the kick and keeping the motivation going long-term. But being coached is a big investment and a lot of work. Worthwhile, incredibly rewarding, and with a high ROI--but it's still work.

Most nonprofit leaders just need a little kick. That's where Fundraising Kick comes in. Fundraising Kick is a weekly coaching email dedicated to getting you out the door to ask someone for money. Each email is filled with nuggets of proven fundraising strategy, steps to make lists and work through those lists, and even scripts to use on the phone or when you're sitting in front of a prospect.

"I like that the emails are filled with simple things that can be done right now to bring in some income and re-engage donors. Simple things that I kind of know to do, but don’t always make time to do...I think Fundraising Kick coaching emails are excellent, I really do."
Michael Hodsgon, Founder
Cause4Effect Ltd
Aberdeen, UK

It isn't free. It costs $9.97/month. For something that costs less than a latte a week, the potential ROI is phenomenal. One ask could pay for a year's subscription for an entire team of fundraisers!

"Thank you for Fundraising Kick! The one on fundraising cocktail parties was one of the most useful things I've seen as I'm trying to get members of our Trustees to host parties. It's nice to have a clear plan from an outside expert."
-- Robin Glossner, Development Coordinator, James V. Brown Library, Williamsport, PA

Fundraising Kick isn't for everyone.

Kicks are crafted specifically for super busy nonprofit leaders, especially CEO's, executive directors, and board members. The coaching emails will often be short but each has incredibly concrete steps. Marc does all he can short of reaching through the email and dialing the phone for you! (You can see a couple sample kicks here.)

"Every week I get one of Marc's Fundraising Kick emails. They are great! The Kicks don't always pertain to my situation, but they remind me to focus on what's important."
-- Trisha Box, Regional Representative, KLOVE/AIR-1 Radio, San Antonio, TX

"The Fundraising Kick coaching emails are great. Short, sweet and useful. They definitely gave me ideas and encouragement. Thank you for making my job easier and more enjoyable."
-- Eli Adler, Director of Development, Jewish Arizonans on Campus, Phoenix, AZ

This isn't some pre-written email autoresponder. Marc writes it out each week so it will be fresh and can help you capitalize on current events, holidays, and anything else that will help fund your cause.

I want to get started today!

I want to raise the money my nonprofit needs this year. I just need a little Fundraising Kick.

Weekly Fundraising Kicks at $9.97 a month

Weekly Fundraising Kicks at $119 a year