5 Ways to Keep Motivation After the Year-End Giving Season 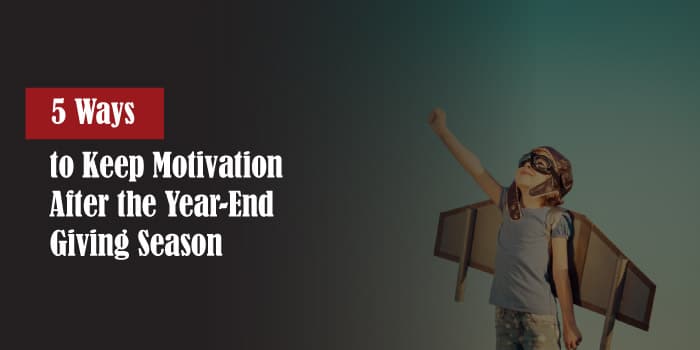 There’s no denying that year-end giving is a powerful force. After all, some reports suggest as much as one-third of all annual giving occurs in December alone!

However, once the final numbers are calculated and the year-end campaigns end, what happens then? You’ve just completed a massive campaign, hopefully with massive success as well. The energy of year-end giving is palpable, but does it all end when December does?

It doesn’t have to! In fact, it shouldn’t. There are ways for your nonprofit to maintain the momentum of year-end giving well into the new year. If executed successfully, you can build on that momentum and continue growing from it going forward. Instead of using the year-end season as a once-a-year success, it can become a capacity-building launchpad for your organization year after year.

You might be worn out after the year-end season, and that’s understandable! The following tips for maintaining the year-end giving season momentum span a wide range of intensity levels— whatever your nonprofit, staffers, and donors are capable of right now. Check it out:

You’ve just finished with the biggest giving season of the year. Congratulations, that’s a massive feat! However, don’t relax just yet— you’re in the perfect position to build off that momentum and grow your fundraising capacity going forward. The following tips are a great way to start, so let’s dive in!

1. Reflect on what was accomplished.

Before you do anything else— or ask for a single donation— you must reflect on the work you just completed. The year-end giving season is a major accomplishment for your staffers, volunteers, and donors. It’s important to reflect on the milestones reached with a humble, grateful rundown.

Don’t use this as a fundraising appeal. Instead, focus on showing your donors you appreciate them to truly build relationships. Let’s break down an example to highlight a few best practices when it comes to making these recap communications stellar:

Begin with a “Thank You.” Then, lead into a longer discussion of all that was accomplished.

Get specific with details on all that was raised. Remind donors that it was all fueled by their gifts.

Demonstrate impact. Show donors exactly how their gifts made an impact. Can you put a face to the receiving end? Do it!

A thank you should go out as quickly as possible. And, according to research by lead philanthropy researcher and chief executive at The Philanthropy Center Adrian Sargeant, an additional impact report should be sent within 90 days.

While you’re not asking for donations with this communication, keeping supporters in-the-loop regarding your year-end fundraiser’s success and concrete impact will go far in future donor retention. When these supporters see that you’re doing good work with their gifts, they’re going to want to keep giving going forward.

You probably hosted an event (or two or more) during this past year-end giving season, so it’s understandable if you feel a little worn down in the event-planning realm. And, in all of the chaos of new year goals and resolutions, your donors might be feeling a bit worn down as well.

Events are a great way to build excitement in your donor base and encourage giving. However, for an event to be successful after such a busy fundraising season, it needs to be one of two things: 1) Laid-back and lowkey, or 2) Exciting and energizing.

Evaluate your staff and your donor base for which type of event would best suit them. However, remember that “laid-back” and “exciting” don’t have to be mutually exclusive— a combination of the two ideas might be the best option for your nonprofit.

Did you know that 55% of people who interact with nonprofits on social media networks end up taking action, whether that’s volunteering, giving, or otherwise participating? Communicating with supporters online is a relatively low-cost practice, but it can have major rewards.

As you head into the new year, focus on revamping your online presence and engaging your supporters through that method. If you’re completely new to using social media and other online tools in your strategy, check out this DNL OmniMedia guide to building a nonprofit digital strategy. Otherwise, simply evaluate your processes for the following:

Online engagement requires little physical planning for your nonprofit, so consider hosting an online-only campaign in the early months of the year. This gives your staffers some time to relax and plan for larger initiatives later in the year, while also ensuring you stay front-of-mind among supporters previously engaged during the year-end giving season.

Maintaining momentum after the year-end giving season doesn’t necessarily mean maintaining fundraising momentum into the early months. It can also mean maintaining general excitement and dedication surrounding your nonprofit, and the easiest way to do that? Engaging supporters as volunteers.

Maintaining a volunteer program is valuable for many reasons, not the least of which because it provides your nonprofit with needed helping hands. However, someone interacting as a volunteer at your nonprofit also gets to experience your organization at work, building their trust in and appreciation of what you do each day. These programs are both helpful now, providing needed resources, and helpful later as the perfect pipeline to lifelong support.

Engaging supporters as volunteers can also have a positive financial impact on your nonprofit through volunteer grant programs. Through these programs, companies pledge to make a donation to approved nonprofits corresponding to volunteer hours worked by their employees. This is a popular type of corporate philanthropy and one of the easiest to start leveraging if you already have an active volunteer program. For more information, check out this listing of the top volunteer grant companies by 360MatchPro.

The year-end giving season likely brought in the largest number of donations your nonprofit received in one period all year. That means that it was probably the highest influx of donor data you received all year, as well!

Examine that data for new insights on your donor base, such as:

Instead of diving straight into fundraising in the new year, motivate your staffers with an examination of your year-end campaign’s data. Spend the early weeks of the year contacting donors accordingly, such as welcoming new supporters and beginning to steward potential major givers. Further, begin planning for fundraising efforts later in the year with these new insights.

This data is powerful for building real relationships with your supporters and can remove much of the guesswork for your staffers on how to best engage certain segments going forward.

The start of a new year is an odd time in nonprofit fundraising. You’ve just completed the biggest fundraising push of the year prior— year-end giving— and it’s important to maintain the motivation that the season began.

Though you’ve just completed the busy season, it’s important that you not rest yet! Whether it’s something as simple as cleaning up your online presence, or something more involved like hosting an event in the new year, the above tips should help you build off the year-end giving momentum going forward.