Join the conversation in Twitter – get social with “social media”

I’m thrilled with the increase in Twitter usage I’m seeing! More and more people are checking it out.

Here’s a tip: feel free to reply to other people’s tweets.

If people are using Twitter, they know their comments are public. If they wanted to be private, they would’ve sent a direct message or an email. Or given the person a phone call.

But publically tweeting is implicitly giving people permission to reply. And replying is putting the “social” in social media!

I recently counted forty-two tweets before I saw an “@reply,” a reply to someone else’s tweet. They were all broadcasts and retweets. That’s great. Twitter is a fun space to put out things you’re thinking and to retweet other people’s wit and wisdom. But the power of Twitter really multiplies when you reply to those tweets.

If you’re using the Twitter.com site:

What’s cool about this is that your message both gets seen in the sender’s “mentions” section and is linked to her original message.

Ever see a tweet that is in reply to someone but seems totally odd?

Did you know you can find out what the first tweet was? Just click on the “in reply to” link: 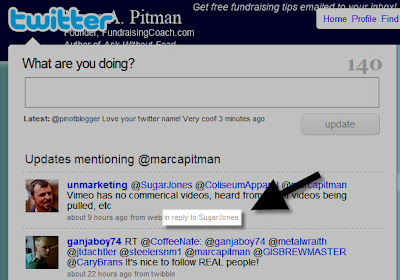 In this case, it goes to here:

If you use a tool like Dabr, it tries to mash together mutiple tweets that may relate to this conversation. 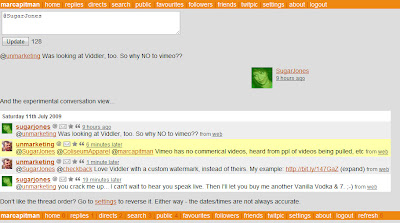 The point is, if someone is tweeting, they know it’s public. So jump in and reply!

Here ends the “Replying to tweets 101” lesson. 🙂 I hope that helps you get even more out of Twitter!

Other posts on using Twitter for nonprofits and fundraising: