Google Chrome for a Cause: Boon or bust? 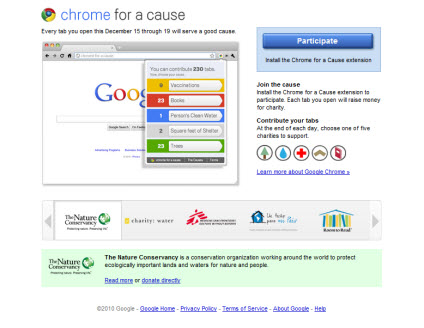 I just saw a tweet from @legaleagle2010 about the USAToday’s story on Google’s Chrome for a Cause.

Apparently, installing this extension will let you donate money for every tab you open in a day. You’re able to choose to support either: The Nature Conservancy, charity:water, Doctors Without Borders, Un Techo para mi País, or Room to Read.

This is only good between December 15 and 19. And it is unclear what this extension will do, or what information it will collect, after December 19.

While still the undisputed giant in search and the source of many innovations, Google is notable for a bunch of less-than-successful initiatives like Google Wave. As such, Google is a great example of quick proto-typing: trying out an idea and discarding it if it doesn’t fly.

So what do you think? Is Chrome for a Cause a boon for nonprofits? Do you think we’ll see a tsunami of support for this extension? Or is it merely another ripple like Google Wave?