How personal should your social media be? 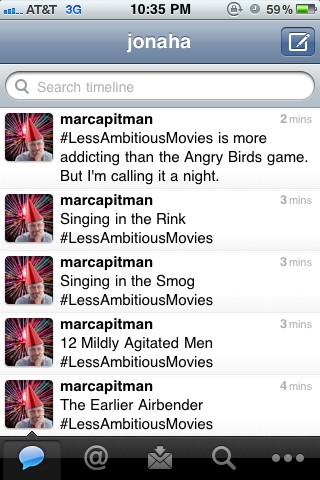 A few weeks ago, a Twitter hashtag, #lessambitiousmovies, caught my attention. It was around 10:30 p.m. after a hard day and I had a blast coming up with appropriate movie titles. Apparently I tweeted alot in 30 minutes! @jonaha sent me this screenshot. I’d totally dominated her stream!

The next day, I got an email from someone letting me know that, despite 3 years of informative and valuable tweets, those 30 minutes overwhelmed him so much he was unfollowing me.

First of all, I’m sure people unfollow me every day. Twitter is so fluid that people are coming and going all the time. Fortunately more people find me interesting than people that don’t. It amazes me that this one person thought I’d notice his unfollowing me. I really don’t pay attention to the “unfollows” and don’t get why people would. I try to only follow people that I find value from so I expect people to do the same with me.

Social media needs to be personal. It is “social”! People want to connect with people, not with faceless institutions. So it’s good to be personal, even quirky, in your social media communications.

But how personal should your nonprofit account be? That depends on your organizational culture. If your culture is quirky and fun, people will expect that in your communication.

But what if your culture is stuffy or more formal? Here are some ways to communicate personally without violating your culture:

None of these are foolproof. When it comes to social media, you’ll need to be open to letting your employees make mistakes. [But please learn from the Honda Crosstour failure: if someone is an employee of the company, be upfront about it!] Social media is much more transparent than other media and people will call you out on it. It’s so important to be authentic.

Would I do this sort of thing from my account again? Most definitely. Every time I participate in one of these memes, I meet people I haven’t known. And I find fun sides to people I’ve already been in contact with.

Would I do the #lessambitiousmovies from an organizational account? Probably not. But if the organization were movie related, even tangentially, that might be a great way to engage fans.

How about you? What are you doing to help keep your organization’s social media communication “social”?