Did Charities Sleep Through The Great Super Bowl Blackout? 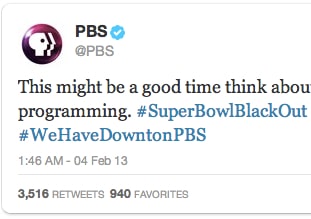 Last night the power went out at the Super Bowl for 33 minutes and 55 seconds. And brands had a field day using Twitter to add humor and garner brand recognition. CNET reports that during the blackout, Twitter activity was around 231,500 tweets per minute!

Tamsen Webster of Allen & Gerritsen and Georgy Cohen of Crosstown Digital did an amazing job of finding and retweeting the best. Some that stick out for me were:

Someone even took the initiative to start a new Twitter account @SuperBowlLights and gain thousands of followers and retweets in that half an hour.

Where were the nonprofits?!

The only nonprofit tweets I saw were from Love146 and PBS. Both responded with humor.

Rob Morris, president and co-founder of Love146 made a humorous Pink Panther reference in a tweet. This was a good use of Twitter since it’s almost always great for nonprofit leaders to show they have a sense of humor. The old axiom is true: people give to people. So proving you’re a person with personality is a vital step in increasing donor loyalty.

The Superbowl trophy is GONE! #pinkpantherstrikesagain

PBS‘ tweet took personality to a whole new level. Anyone that has done social media for an organization knows that it’s tough to find the organization’s “voice,” let alone find one that is a bit quirky.

What did your nonprofit do?

Companies reportedly spent around $4 million per 30-second spot. But with the nimble use of Twitter alone, companies like Audi and Oreo are getting media attention today for free. In an age of a 24/7 news cycle, agile nonprofits have an unprecedented opportunity to get media attention. But it’ll take timing and usually humor.

Did your nonprofit have some fun tweets? Tell us about it in the comments?