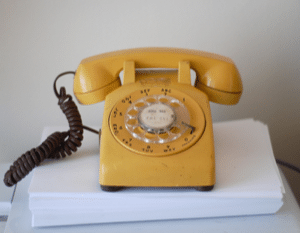 A while back, I received a call from an ALS Foundation. The call was awful. So awful, I’ve waited over a year and a half to write about it. Long enough that I don’t remember exactly which ALS organization it was. But fresh enough that the emotions linger. And I want to help you from making the same mistakes this organization made.

Effective fundraising involves emotions. But this call is a case study in how not to trigger a donor’s emotions.

You see, because the caller knew some of my story – that my mother died from ALS – he assumed he knew all of my story. You could hear it in the pained, “Wasn’t it so awful and tough” tone in his voice. But the caller was completely tone deaf. When I didn’t respond, he probed further. He kept rummaging around in my emotional closet looking for things to parade out.

He wasn’t trying to enter into my story. He was so completely enraptured by the fictional story he was weaving that he probably though my attempts at reining him in were merely “denial.”

Rather than adjusting to meet where I was coming from, his pitch was a guilt-ridden manipulative, “You wouldn’t want to be responsible for someone else having to go through that too, would you?” As though my little gift will miraculously heal an individual from the horror of ALS!

Entering into the Donor’s Story without Pissing the Donor Off

Stop assuming your donor’s story revolves around your cause. That idea might sound good as an idea at a staff meeting. But what seems like a good idea in the office may be completely off-putting in real-life. (If you need proof, listen to any number of the “if-you-were-a-smarter-listener-we-wouldn’t-have-to-tell-you-to-give” messages during your public radio station’s pledge drive or “no-pledge” pledge drive.)

Instead, talk to your donors. See if this story you think is typical really is true for your typical donor. And if you find it’s not, listen. Don’t try to force your donor’s story to fit into the story you created.

What could the caller have done? He could’ve realized that most human beings want to feel good. (You can see Tom Ahern saying that – for example around the 9:37 point – in this short Story Tour video.)

Feeling good is an emotional state. And often, to help someone feel good, they first need to be uncomfortable. So by all means show us the bad:

Allow us to see the truth of the current situation. The way it is if no one does anything. Let us even get angry. But tie the ask to something believable that we can heal.

The caller should have told me how a gift – even a gift to fund research – might lighten the load on a patient’s family. Or how it may touch the heart of the patient herself. Maybe even that the patient would be moved to show some faint expression of joy. Maybe managing a flicker of an eyelid.

It’s the kind of “I can make a difference” emotion that you want to trigger.

But manipulatively attempting to imply that by my not giving made me somehow personally responsible for prolonging someone’s agony? Totally not believable. The only anger it triggered was anger at the caller, not at the condition.

And that’s not the kind of emotion you want to trigger.

If you want more on how to craft a story donors respond to – and to do it with integrity – watch Tom’s episode of the Nonprofit Story Tour at http://nonprofitstorytellingconference.com/story-tour/tom-ahern/