Fundraising in the last days of December

Year-end is a huge time for nonprofit’s fundraising. There’s a debate if the spike in giving is because we ask so much more frequently at this time of year or if it’s because people are more generous because of the mix of public and religious holidays combined with the end of the tax year. What ever the cause, this is the time of the year nonprofit’s need to be clearly engaging with donors.

It’s definitely not a time of the year to wing it! Especially during the last week of the year.

Fortunately for us, fundraising expert Steven Screen has a simple strategy for the very last week of the year. This strategy is actually odd. It’s just about opposite everything you’ll read on this blog. I teach that our role is to focus on what Chris Davenport calls “transformation rather than transaction.” We should focus on “impact” not the process of giving.

But not during the last week in December. In the “Simple Year-End Campaign” video, Steven says this is the

“one time of the year to forget all other rules and focus on the deadline by which the donor has to give you a gift.”

He gives the plan in this short, 3 minute video. It breaks down to three emails:

The message gets shorter with each one. And it’s all focused on telling donors to give before midnight on December 31st.

Weird isn’t it? Steven agrees. But it works time after time.

Try it yourself this year

Good fundraising is so often counter-intuitive. Just as this email campaign in the last 3-4 days of the calendar year.

If this strategy makes you queasy, I understand. So does Steven. At the end of the video, Steven gives two strategies for testing this strategy so see if it’ll help your donors.

Year-end fundraising is a big time for nonprofits. Don’t wing it this year. Especially in the last 3-4 days.

You can watch the entire 3 minute video at https://nonprofitstorytellingconference.com/year-end-email-campaign/ 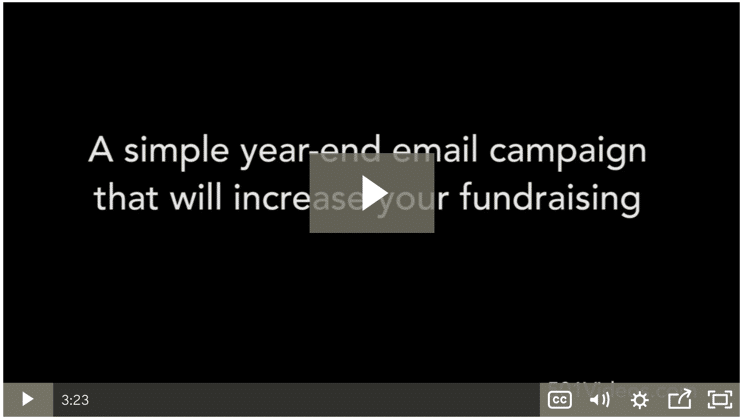