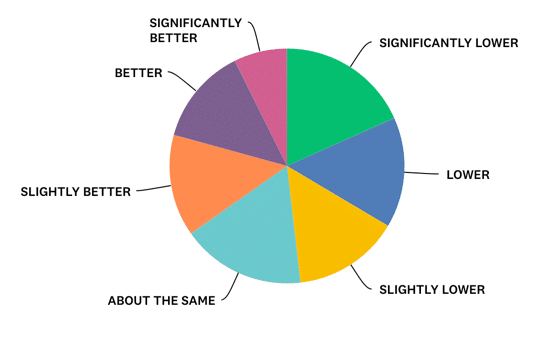 But most say overall 2018 fundraising is the same or better than last year’s.

What a year 2018 was here in the USA. It started with a lot of nonprofit professionals and boards scared that the new charitable deduction would hurt giving. As the year went on, others worried about the tariffs and their impact on the economy and specific donors’ businesses. Then came the wild fluctuations of the stock market in December, causing donors to reconsider year-end giving.

Sent to the subscribers of our fundraising coaching emails and leadership coaching emaillists, as well as shared through social media, the sample was a relatively small 178 respondees. But the results are interesting to look at. The following is the findings in this survey followed by some interpretation of the results. Hopefully these findings will help you as you work to understand your 2018 fundraising results.

The first question was about overall 2018 fundraising results. Of those located in the USA, about two-thirds reported their fundraising for the year was the same as or better than, last year. The results were:

The response shifted a dramatically when fundraising was focused on December. Practically a reverse of the numbers above. Almost half of responses from the USA said their December 2018 fundraising was the worse than last year. The breakdown is:

For nonprofits outside of the USA, the responses were: lower – 21%, same – 21%, better 58%. Interestingly, over one quarter of nonprofits in this group said December 2018 fundraising was “significantly better” than the prior year.

What Does This All Mean?

So why such a dramatic shift in December results? The comments that came with these responses suggested some interesting themes.

Lower Retention – Higher Average Gifts: Multiple nonprofits reported that while their dollars raised stayed the same, their number of donors dropped. Often dramatically. At least two nonprofits said they had half as many donors but still raised the same amount of money. Perhaps these nonprofits are getting better at asking for larger gifts. But this drastic drop in retention should be a major concern.

Tax law unclarity continues: While 39% of the USA responses said the new tax code was hurt their fundraising. Many nonprofits left comments that donors were advised by their accountants to skip giving this year in favor of “bundling” their gifts next year. But a full 59% said that it had no impact on their fundraising. These comments shared that their donors were more interested in the impact of their gift than the tax deductibility.

Politics continues to shift giving: Another trend in the results was nonprofits being told by donors that all their giving was focusing toward mid-term election campaigns. It will be important for nonprofits to follow up with each of these donors to re-engage them in this coming off year.

These themes point to some rough waters ahead. Especially when combining the drop in donors with the prospect accountants and financial planners encouraging donors to “bundle” their giving. Since most nonprofit communications systems are tied to donations, this could mean that donors who didn’t give this year will hear less from the nonprofits they’ve historically supported. Or they’ll be treated more like first-time donors with “acquisition” appeals than trusted supporters. These donors run an higher than normal risk of permanently dropping the nonprofit from their philanthropic giving priorities.

And if bundling becomes the norm, nonprofits will need to consciously work harder than ever at retaining donors. We are suggest nonprofits adjust their communications in two ways.

Fundraising effectiveness is always a moving target. Hopefully nonprofits will be able to use these challenges to get better at communicating the powerful impact donors have. The good news? Paying attention to these suggestions for stewarding donors will help your fundraising no matter what the economy does!

How was your 2018 fundraising? What trends are you seeing? Tell us in the comments below.

And for how board members can help with fundraising, check out 21 Ways for Board Members to Help With Their Nonprofit’s Fundraising at https://fundraisingcoach.com/board-fundraising/