Get over your discomfort and politely ask for money 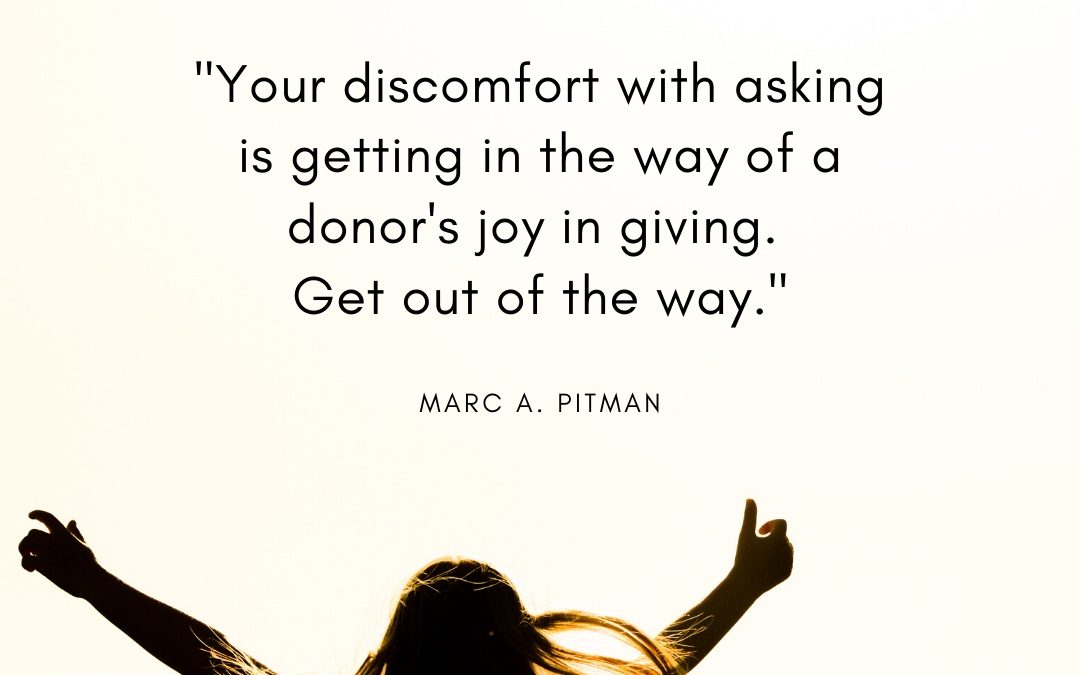 I recently tweeted “your discomfort with asking is getting in the way of a donor’s joy in giving. So get out of the way!” (Click here to tweet that.)

Since then, I’ve been getting a lot of questions about how to get over the discomfort!

How to politely ask for money

Too often, our own beliefs about money get in the way of our asking politely. We may have an unhealthy view of our personal “worth” tied to money. Or our faith tradition may lead us to see money as evil. Or we may simply be tied to thinking that if people give us money, we need to give them something back. As though it were a business transaction.

Our discomfort leads us to ask in really awful ways. We might come across as demanding money. Or being a constant nag about money. Or we might say things like “will you support us?”, hoping donors will somehow read our minds and know that “support” means giving $100,000 this year.

But asking for money isn’t a business transaction. Asking for donations isn’t really about us at all. In the best way, asking is about the donor. It’s about what they value. What they are interested in. And the impact their gift can make in an area they care about.

Yes, fundraising is about raising funds. But too often, we forget that when we’re asking for money, we’re not asking donors to pay our bills. We’re inviting donors to experience joy.

Instead, we get all hung up in what we are afraid of. And we let ourselves get in the way of their joy.

And that needs to stop.

The best way I’ve found to help people get out of the way? Practice your asks.

Long before you’re face-to-face with the donor try different ways of clearly stating the dollar amount.

As you go through your day, practice phrases like:

In Ask Without Fear!, I recommend asking for the total gift. But as you practice the phrasing, you may find you’re more comfortable breaking the total into quarterly or monthly asks. Rather than asking for $1,000 for the year, you may find it easier to ask for $84/month.

The key is to find a phrase that you can say clearly, without hesitation.

You see, if you stumble during the ask, it’s like you’re putting up roadblocks to the donor saying “yes.” Your anxiety may be misinterpreted by the donor. She may feel your stress but think it’s her intuition warning her something’s not right. Or your stumbling may cause them to focus on your, your speech patterns, and any number of things other than your actual ask.

So practice your ask lines. The more natural you make the actual ask, the easier you’re making it for the donor to consider the ask.

Then you won’t have to worry about how to politely ask for money. You’ll be doing it. And you’ll find you’re actually enjoying watching them experience joy!