…you should at least be learning about using Twitter for your nonprofit.

Check out the volume of tweets during the Inauguration: 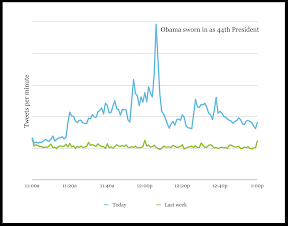 The green line is last week at the same time. The blue line is this week. Twitter reports up to 5 times as many tweets per SECOND during the peak time. Yes, they measure tweets per second!

All too often, we expect people to come to us to hear our stories. But I’ve found Twitter to be a terrific way to engage in conversations where people are already having them. And the number of people using Twitter grows every day!