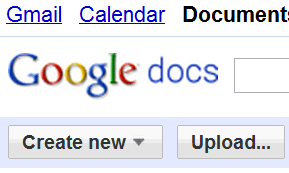 Have you checked out Google Docs? I keep finding remarkable ways to use this for collaboration!

For example, an organization I work with recently ran a phonathon that didn’t involve asking for money, but asking people to advocate for our cause. Our database administrator did the sort and dumped hundreds of names exported onto two Excel spreadsheets with just the minimum of information: record number, city, state, first name, last name, phone number.

That’s all we needed to make these calls.

The problem was, if we printed out multiple copies of these sheets and gave the sheets to each caller, we would run into the very real possibility that we’d unknowingly call people two or three times. Multiple calls were fine, but only if they were planned!

Just giving the sheets to callers was a bit problematic too. Not all of them came in to our central office. But saving the Excel sheets as individual files would be a complete hassle.

So we experimented with Google Docs. We simply uploaded the spreadsheets and added three more columns:

Then found out we could see edits being made in real-time! This would let us see the letters as people were typing, no matter where they were located. Eery, but incredibly helpful to all of us on the team.

The callers loved it using Google Docs! They would choose a city or town, fill those lines with their initials, and get busy making calls. They said seeing their initials on so many rows made it feel like they were actually accomplishing something. They were also able to start at different times and still be, literally, on the same page.

I’m not sure any of us got over the “magic-like” quality of all of us putting information into the sheet at the same time. We could all see the notes people were typing in, the communities they were taking, and the actions the call recipients were promising to take as a result of our call.

We could even use a chat window right on the page to ask each other questions.

Each night, I’d try tally up how many calls were done. I’d also try to bring uniformity to the codes being used so they could get imported into the database more easily. I’d send out the stats of total calls and what the results of the call were each night to give callers immediate feedback. (The number of calls we were able to make was remarkable.)

To differentiate what day the call took place, callers would put their initials and the date, ie. if the date were May 23 and I were the caller, I’d put: map23. This worked for us because we were only calling for a week or two.

Google Docs is free and easy to use. I don’t think I’d use this for any lists that would include private information. (In our case, the record numbers already were public, not private.) But I highly recommend trying it for phonathons like thankathons or phonathons trying to get people to act in a certain way!

Have you found cool ways to use Google Docs? Let us know in the comments!