Another take on mobile giving 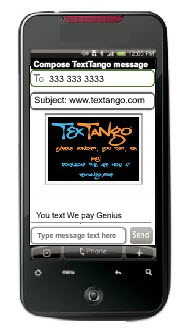 After my post about mobile giving apps, I learned about a new free app called TexTango.

The idea isn’t specifically for nonprofits. This app pays you to text. You download it for free and there is no monthly fee. By using this app instead of your phone’s native SMS service, you see an ad when you text and the person you text sees an ad.

You get 0.5¢ for each text. You receive a Visa debit card from TexTango that gets reloaded each month based on your texting.

Member can choose to have all or a portion of their earnings go to the charity of their choice. Like so many of these services, you’d need a large volume to make it amount to anything you could use.

But the TexTango people told me that Neilsen estimates:

With three kids under 12, and one already doing some texting, those numbers start making this payment alternative seem plausible to me. If my son is average, the debit card would be getting around $16 each month. Not a huge amount, but since he’s under 18, that debit card is mine. 🙂

If you’re a small nonprofit with mostly 55+ donors, 20 people doing the average texts would add about $20 to you each month.

Larger nonprofits with 1000 texters doing the 55+ average of 200 messages a month would add about $1,000 to your nonprofit. Each month.

Imagine if your cause could harness the texting of their kids? 100 teens could result in $1650 each month for your charity.

The TexTango CEO told me that at one group advertised an event through TexTango and had 6000 people show up. The implication was what if a nonprofit hosted the event and had people giving a portion of the texting income to them? That could add up.

The TexTango folks also said that they donate a certain number of the ad banners to nonprofits. So charities might get a little marketing bump too.

Is this for your nonprofit?

What do you think? Would this be helpful for your nonprofit?

The big challenge for the company is changing the behaviors of lots of people. And a promise of money is often enough to change behaviors.

I tend to not focus on this type of fundraising. Things like this and search bars and calling cards require nonprofits to become a volunteer sale staff. It takes just as much effort to ask people to download an app as it does to ask them to make a gift. And I find it odd to go to a nonprofit site and see logos from these businesses all over the home page. I think it draws away from the nonprofit’s own story.

But would board members and volunteers feel better about asking people to do this on top of their giving? I think they might. I’m not a fan of selling chocolates and wrapping paper either, but many people prefer feeling their giving something when they ask for a donation. So this might work.

What do you think?

Extra money from people’s normal behaviors is tempting. Do you think something like this might help fund your cause? Let me know in the comments!