Are your politics hindering your fundraising? 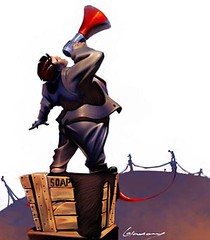 A few weeks ago I sent a version of this to my Fundraising Kick subscribers. But I’m seeing someting that will seriously impair your fundraising so I wanted to share it with you too.

If we live in a democracy, we need to be active. We need to participate in the politics of our communities and countries. But as fundraisers, we need to be very, very tactful. And careful.

Unless your cause is political, your politics can seriously hinder your fundraising.

Here’s an example from the USA that will surely irritate some of you. Apologies in advance. (Links to the source data will be at the end of this post.)

Let’s say you’re a Democrat. You think all Republicans are non-thinking, homophobic, reactionary idiots who want to throw us back to the Dark Ages. (Honestly, I’ve seen those words used by fundraising professionals and consultants in the last week!)

Being civically engaged, you tweet your views. Even during work hours.

Your slamming conservatives saying they want to send us back into the “Dark Ages” may leak into your conversations with your board or donors. But chances are if you have 9 people in a room: 3 of them are Republican, 3 are Democrat, and 3 are independent. A study just a few weeks ago showed there are 36% of Americans calling themselves Republican and only 32% calling themselves Democrat.

Which source would your nonprofit prefer to get gifts from?

You are free to say whatever you want. But do so realizing how your best donors might take it. If your work is largely government funded, learn to tell your story in a way that resonates with fiscal conservatives.

Whether you agree with them or not. 42% of Americans consider themselves “fiscal conservatives” about government spending.

Shut up and listen

One of the best ways to learn to tell your nonprofit’s story in a way that will resonate with people with a different world view is to be quiet and listen to them. Ask them why they support your charity. Find out what got them interested in the first place.

When you meet with them listen to the words they use to describe what you do -— especially the words and phrases you don’t normally use yourself.

This isn’t just Democrat vs. Republican. It goes for any divide: conservatives and liberals, PETA people and carnivores, Microsoft fan boys and Apple devotees.

Your passions are good. They are what set you apart.

But democracy is made up of lots of people with different beliefs finding a middle way.

So I wanted to remind you this common sense message: Be passionate, celebrate diversity, and fundraise wisely.

Source Data (Proof that I’m not making this stuff up!)
– One such study was in the Chronicle of Philanthropy a few years back: http://bit.ly/GRu4kL looks like you need a subscription to read it.