Is your nonprofit ready for #GivingTuesday?

Giving Tuesday is right around the corner. Does your nonprofit have a plan?

Since most of these purchases are for gift giving, many nonprofit folks (and social media geeks) decided to test out “Giving Tuesday” on the Tuesday after the US Thanksgiving. I remember celebrating this in 2011, and the hashtag #charitytuesday has been around since at least 2009, but the GivingTuesday.org site says that the first annual Giving Tuesday was in 2012. Social media users tagged updates with the hashtag #GivingTuesday to help their posts stand out.

The results? Pretty impressive. The Huffington Post says that Giving Tuesday spurred 113% more donations than the previous year. Of course up until then, the Tuesday after Thanksgiving was fairly unremarkable. So that may mean the average nonprofit went from no donations to one donation! But as you can see from the infographic below, nonprofits raised some real money. And the average online gift jumped from around $62 to just over $100 on Giving Tuesday. 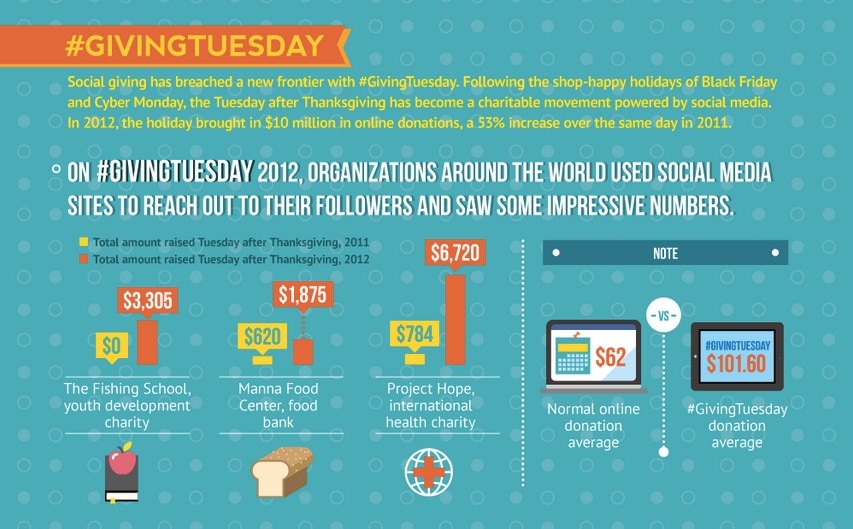 It’s a well known fact that we are now entering the most charitable time of the year. Not only do the holidays celebrate giving, but December 31 is a powerful deadline. Many nonprofits receive 30% to 50% of their budget in the final days of December.

One of the biggest mistakes I saw nonprofits make last year was to bombard our inboxes with stupid, “There’s still time left” emails almost daily in the last week of December. As Google’s recent study shows, donors are actually planning their year-end giving in September, not the last week in December. (Download Google’s study here.)

It’s a pre-made excuse to ask

One thing I love about #GivingTuesday is that it’s a “pre-made excuse” to ask. This is something other organizations are doing, and something other media outlets are partnering with. So it’s incredibly easy for a nonprofit to jump on board. And there’s really no risk.

To develop a simple no-fuss plan in the next two weeks, I would:

Of course, you could get far more sophisticated. The most successful online fundraising is organized and planned out with the same specificity as a special event: having a core volunteer team, using marketing and communications, creating compelling messages. These are best planned out weeks and months in advance. But the list above will get you started.

Check out these pages for more ideas on how to harness #GivingTuesday:

How is your nonprofit planning to capitalize on #GivingTuesday?

What are you doing to make the most of this fun day? Let us know below in the comments!