Donor Fatigue - the rest of the story 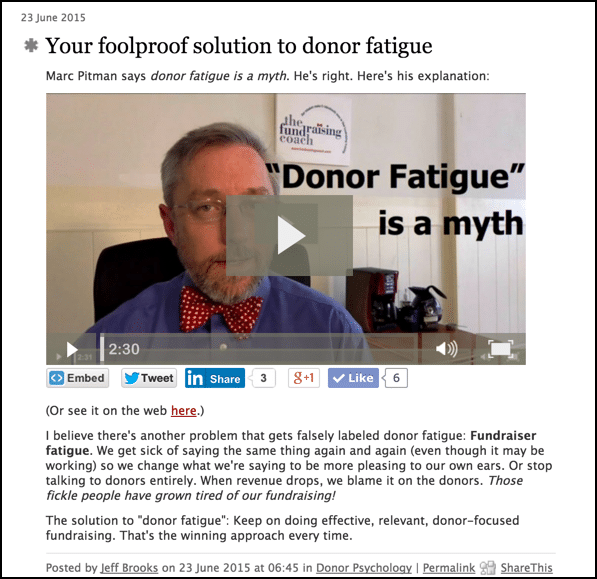 In his recent post, Jeff Brooks agreed with my "Donor Fatigue" video. And he went a step further. Like a newly minted Paul Harvey, he tells “the rest of the story.”

I love his concept of “fundraiser fatigue”! He says that we get tired of saying the same thing over and over so we just stop. And then blame the lack of donations on "donor fatigue."

Be honest: do you get sick and tired of saying the same thing over, and over, and over? Do you ever worry that you’re telling someone a story that they’ve already heard? It's o.k. All great fundraisers have.

I have two responses to this natural situation:

Fundraising isn’t about YOUR enjoyment

Fundraising is a tremendously rewarding career. But it’s never supposed to be about your enjoyment. Fundraising is about raising money by connecting donors with your nonprofit’s impact. Get used to feeling you’re saying the same thing over, and over. And rest in the fact that only people you see daily will know how repetitive you’re being.

You'll find you reconnect with your passion ask you ask donors about their passion.

Do these, and you’ll thwart both donor fatigue and fundraiser fatigue! And you’ll be able to get on with your effective fundraising!