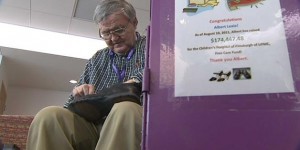 This man, Albert Lexie, shines shoes at a hospital in Pittsburgh. Over the last 30 years, he’s given all his tips to the charity care fund at the Children’s Hospital of Pittsburgh.

From a shoe shine guy!

I love stories like this! It forces us to treat all people well.

In fundraising, it’s so easy to get starstruck by big houses, expensive cars, and flashy jewelry. But all that glitters truly is not gold. Too often, those expensive displays of wealth are really signs of maxed out credit cards and home equity loans.

When we take the time to get to know people, we discover:

Intuitively, most of us realize that all humans have worth despite their ability to give a gift to our organization. But with our limited resources, we need to be strategic with whom we communicate with.

These stories remind us to get over our personal bias about wealth. They force us to treat people as possible major gift donors. To treat people with integrity.

Don’t take this wrong: fundraisers need to talk to donor prospects. They can’t be wasting organizational resources providing program assistance or just “friend raising.” But it’s great to remember that some of our best planned giving prospects are more likely to be smaller annual donors and more unassuming people.

And it helps us prioritize visits to people who would impress our board and to people who are longtime friends of the organization but aren’t necessarily well known. People like Richard, Helen, and Jean. And shoe shine guys like Albert.

You can read Albert’s story over on the Chronicle of Philanthropy’s site:
http://philanthropy.com/blogs/philanthropytoday/shoe-shiner-turns-30-years-of-tips-into-200000-in-gifts/63363