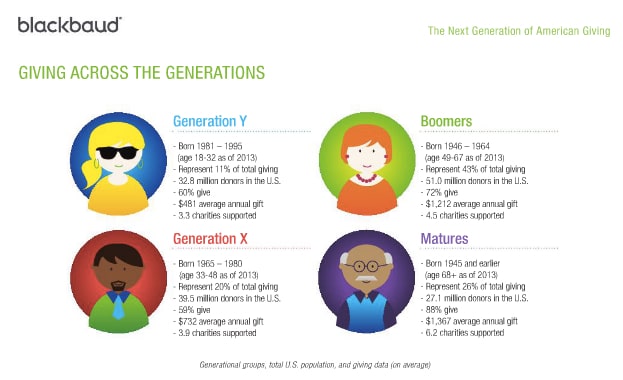 According to their research, Baby Boomers accounted for 43% of giving in the USA last year.

While I generally trust Blackbaud’s research, I find this a bit of a surprise. The “Silents” and the “World War II” generations still hold a lot of wealth. The study’s results could be skewed because it was an online survey. Online surveys effectively rules out the $22 billion given through bequests last year. (Dead people aren’t known to respond well to surveys.)

But this result could make sense, too. Baby Boomers are now in their peak earning years. Despite not being particularly well prepared for retirement, they may feel they have more cash to give. The generational line up as reported by Blackbaud is:

Boomers most likely to be giving monthly

One of the biggest challenges for North American nonprofits is donor retention. Nonprofits will find lots of help in this study, which looks at numerous ways donors engage with nonprofits (volunteering, host events, participate in runs, etc.) as well as engaging with other information.

For example, go to the interactive infographic and look at the study’s findings on digital engagement, both overall internet usage and more specific social media usage.

As might be expected, Gen Y and Gen X have the most varied internet usage, with Boomers and Matures mostly reporting using it for email and banking.

Despite what you may think, significant portions of all generations are using the internet, and even social media.

Another interesting finding is that Generation Y (or Millenials) is the generational cohort most likely to increase giving in the next 12 months. While they’re still giving less dollars, they’re also still only in the beginning of their careers. Nonprofits that effectively engage millenials now will reap benefits for years to come. (Millienlials represent a larger population than Baby Boomers!)

The study found 43% of Gen Y responders helped fundraise or participated in an event like a race to raise money. And Gen Y is the most open to the crowdfunding approach to giving. They had the largest percentage of people who’d actually given through crowdfunding. And almost half said they’d be likely to give (compared to the next highest being Gen X at 30%).

I’m not advocating starting a race or launching a Kickstarter project, but I am advocating taking this generation seriously. They may be the ages of your kids or grandkids, but they’re adults and a tremendously talented group. And they happen to be open to increasing giving in the next 12 months. (Ian Adair gives some incredibly practical tips on engaging Millenials in his section of The Donor Retention Project.)

What should you do?

Here are three take aways from the study:

Get the full copy of Blackbaud’s NextGen report at: www.blackbaud.com/nextgen

Do these results line up with what you’re experiencing? Let us know in the comments below!