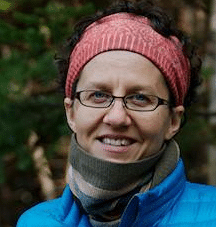 Today it’s my distinct pleasure to introduce you to Renee Tougas. I’ve known Renee and her husband Damien for more than a decade. They’re not your typical fundraisers, so when their crowdfunded Kickstarter campaign for $16,000 raised over $19,000, I knew I wanted their story.

As a fundraising coach, I’m not advocating nonprofits scrap their traditional fundraising program in favor of crowdfunding. But if you have the pieces Renee talks about, it might be an important tool in your fundraising toolkit. Be sure to check out these other posts on 6 channels to call in the crowds for crowdfunding and 3 things to avoid in your crowdfunding campaign.

Renee and Damien live in Quebec. But for the next six months, they and their three kids will be living on the Appalachian Trail. Here Renee is at her best, sharing their story, their thought process, and pulling out lessons anyone can use to make crowdfunding work for them. All interspersed with some of her stunning photography. You can follow Renee on Twitter @fimby and Damien @toesalad.

Crowfunding Success – How we crafted our “Beyond Our Boundaries” campaign

by Renee Tougas of http://fimby.tougas.net/

When my husband first proposed hiking the Appalachian Trail as a family I had little clue about where that idea would go. I certainly didn’t envision this.

A lot of adventures, and even fundraising projects, start the same way. A seed is planted and what grows from that is much more than we could ever have imagined.

More than five years ago my husband planted the seed of doing a family thru-hike of the Appalachian Trail.

At the time I could not conceive how this was remotely possible. The backpacking part was daunting enough, but for a lower middle class family of five to just “check out” of normal life for 6 months, that bordered on fairy tale. Nonetheless we held space for this dream in our collective family consciousness.

We started to nurture the idea with family discussions, longer backpacking trips, and gear upgrades. And in a huge, life changing move we restructured our income earning to location-independent self employment. And “all of sudden” the door opened for us to truly consider six months of hiking with our family. Of course it didn’t happen suddenly at all, but through consistent decision making and action (read: blood, sweat and tears) in the direction we wanted to go.

And that’s where we found ourselves last year at this time. Theoretically able to take the time to do a long hike but only two years into our self-employed gig not in a financial place to do so. Unless… unless we could somehow earn money while on the trail. For the previous two years we had been building recurring streams of income but those alone would not support us.

We don’t expect other people to pay us to hike. Now that would be a fairy tale. We are entrepreneurs, very much grounded in the reality that people pay other people for goods and services of value. We needed to produce something of value that people could purchase while we were hiking. With the intention of that income filling in the financial gaps during our six month adventure.

Thus, the idea for Beyond our Boundaries: A Family Adventure on the Appalachian Trail was born.

Our basic idea was this: create an engaging video series of our family hike, while hiking. Make it interesting, informative and inspiring. Make it something we would be happy to pay for and happy to tell our friends about. Sell individual episodes and monthly subscriptions at a really affordable price.

Through years of blogging about being a family in the outdoors together and searching in vain ourselves for family outdoor inspiration we knew there was a market for this.

We had an idea that we really believed could fly. We had a market. We had the communication and technical skills to deliver a good product. We had “the cast” aka: our family, ready and at our disposal.

What we lacked was some start up funds.

Producing and delivering an online subscription video series required us to purchase additional tools and web infrastructure, not to mention hiring an editor to help us actually create a good product.

Some friends of ours recommended Kickstarter as a way to bootstrap our project.

With the exception of band-trip fundraising as a teenager, raising money is something I’ve haven’t done. I have an aversion to the very idea of fundraising. I’m happy to give money to things I believe in, but asking for money, well that’s a completely different story.

The more my husband and I talked about it though, the more I came to see that a Kickstarter campaign would be an ideal way to raise funds for our creative project.

Kickstarter is a crowd funding site, the world’s largest apparently. Their mission is to bring creative projects to life. To use the Kickstarter platform to raise funds, your project must be about producing a creative work – film, music, stage shows, comics, journalism, novels and book, video games, etc.

In exchange for pledging to support your project, donators, also called referred to as Kickstarters or Backers, receive rewards if the campaign is successful. These rewards are tangible digital or hardcopy products related to the project itself. A download of the video or music album, for example.

The unique feature of Kickstarter is that the fundraising campaign must reach your goal in order to collect the funds from your backers. It’s all or nothing. This gives backers a certain reassurance that not just any money-grabber will attempt to raise funds and that project creators will follow-through on the project once receiving their funds.

Our project idea was to create a video series. Access to the video series is what we could offer our backers as a reward. By backing us they basically pre-bought their subscription to the series. Higher level rewards, designed with companies and small businesses in mind, included advertising on video episodes and our product page.

Our Kickstarter campaign was successful. Yay!

It provided the funds we needed to secure an editor, pay the costs to set up our web structure (we did all the actual work ourselves since my husband is a web developer), pay ourselves a small stipend for our work, and purchase the remaining tools we needed to deliver a quality product.

In exchange, our backers gained access, at a discounted price, to the videos.

This was our first Kickstarter campaign. It was actually our first fundraising campaign ever.

We’re not a non-profit. We’re a family, self employed sole proprietors, fundraising isn’t within our normal activities. And still we were successful, very successful actually, at meeting our $16,000 goal. 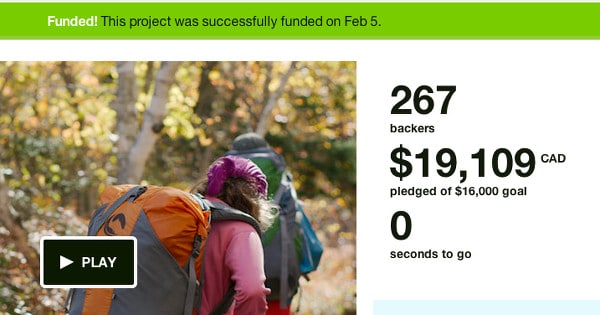 Here are five principles that I think helped us to reach our goal.

Both my husband and I are bloggers. We’ve been writing and connecting with people online with our blogs, Facebook, and other social media (before it was called that) for nearly a decade. It was those years of connections that laid the foundation for a successful campaign. We didn’t just come out of nowhere asking for money.

There is no such thing as overnight success, in fundraising or living.

Certainly, there were a few backers who supported our campaign who didn’t know us very well. But most of our backers have come to know and trust us online through the work we’ve already done. We were asking people to support the creation of project. To believe in something not yet produced. Relationship and trust were key elements to this. You don’t grow those overnight. 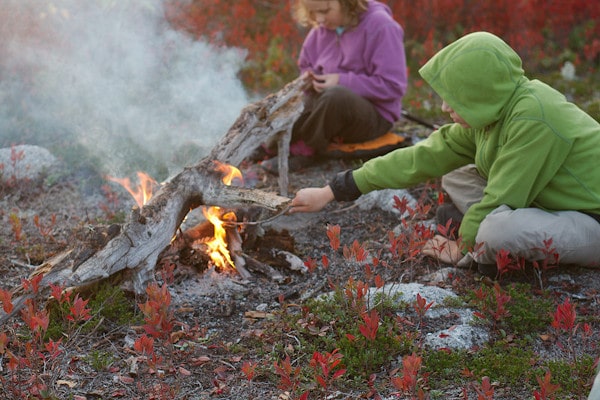 Like I mentioned already both my husband and I are bloggers, but we blog about different things. I’m a memoirist, story telling, homeschool “mommy” blogger. My husband writes a product focused blog about minimalist footwear. Our interests and networks overlap in the areas of intentional and adventurous family living and outdoor pursuits. Not surprisingly, that is what our video series is also about.

I do think having a broad and diverse social network sharing our project was key to our success.

3. There is no “if you build it they will come”

It may have worked in Field of Dreams (the 1989 movie starring Kevin Costner) but real life dream making doesn’t work that way. In reality, it’s more like if you work a lot to build it and then work a lot to tell everyone you know and have them tell everyone they know, maybe people will come.

Some people have this funny notion that Kickstarter is an easy way to raise funds. Slap up a video, ask people for money, see the money roll in.

Running a successful Kickstarter campaign is a lot of work. We spent four months preparing our campaign and then invested many hours during the actual 30 day run. I’ve seen some people compare it to a full time job. For us, it was definitely a demanding part time job (that we did on top of our usual day jobs).

This was a family Kickstarter campaign. My husband and I did it together and we participated in different ways depending on our strengths and interests.

I wrote the landing page. Damien determined our budget. I wrote script for the video. My husband managed the video technology.

Most creative projects are collaborations of some kind. Two minds are better than one kind of deal. Play to your team strengths.

We had never done a Kickstarter campaign before. It was friends who had run successful Kickstarter campaigns who counseled us to give it a try. Because they seemed to know what they were doing, we asked them for their feedback and input each step of the way. They previewed our video pitch and we re-did the whole thing based on their recommendations.

They read our landing page copy and gave valuable insight to what backers would want to know. We adjusted accordingly.

Responding and tweaking our work based on their feedback took extra time for sure. But that was time well spent.

Using a crowd funding platform like Kickstarter won’t work for every fundraising project. But if you want to raise funds for a creative project, I hope you find these tips from our successful Kickstarter campaign helpful for reaching your own goals.

If you want to keep tabs on the Tougas as they are on the trail, check out Beyond our Boundaries: A Family Adventure on the Appalachian Trail. 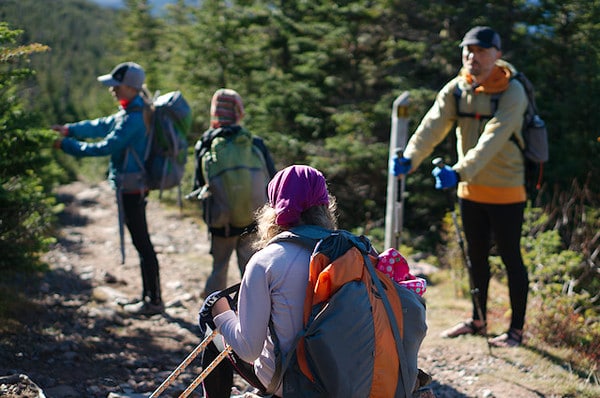